Gaming desks with LED lights take your battle station to whole another level. With these desks, you don’t have to go through the hassle of buying new LED strip lights and placing them around the desk. It saves you a lot of time.

Another thing is that Gaming desks with LED lights have cool designs to cover those lights. They have plastic trim through which you can see the light coming.

There are not many options available, but there are some good ones. In this article, I will review some of the best Gaming desks with LED lights that you can buy.

Here we have the Eureka Ergonomic Z2, the upgraded version of Eureka Z1-S. It got bigger side trims and some minor changes in the tabletop. The Eureka Z1-S also received some upgrades recently, and it sure looks good, plus it’s cheaper than the Z2. Both desks have LED lights built-in, so you should check out both desks and decide according to your budget.

Eureka is constantly trying to take their gaming desks to a whole new level. The aggressive design of Z2 is surely something new. The base frame of Z2 is quite similar to Z1-S and what’s really changed is the top part.

The Z2 has larger side trims with built-in RGB lights. In fact, they are completely covering the right and left side of the desk. The RGB light has seven colors and two modes, single-color, and multi-color, that you change with a simple touch.

Unlike most of the gaming desks, Z2 has introduced a retractable headphone holder and a cup holder. If you are not using any of the holders, just keep it closed, and it blends in with the desk. The front part has an ergonomic slope to reduce fatigue. At the back, they have introduced a gaming style fender with a dragon painted on it.

This desk also has a power strip holder, and Eureka made it so convenient to reach it. They made a panel on the top right side of the desk that opens up, and you can easily plug or unplug the cords. It also has a mobile/tablet holder slot and a large mouse pad. Another new addition is the gaming style fender at the back.

Overall it’s a great new gaming desk with the latest design and some new features that we have not seen before.

If you are looking for a large gaming desk with LED lights, then Z60 can be your best bet. This is the largest desk on this list, with 60 inches of width. It has plenty of space for all of your computer hardware. Z60 is quite similar to Z1-S but bigger.

It has an MDF tabletop that comes in two pieces. I don’t prefer a desk in parts, but the mouse pad covers the seam if you place it in the center. The base structure of this gaming desk is made of metal and is very stable.

Depointer gaming desk is the latest addition to our list. It’s an above-average desk with a bulky design and a deeper table. There are two versions of this desk, and the difference between both is that one has a deeper tabletop and integrated LEDs in the tabletop.

The overall design looks impressive and ergonomic. The tabletop has a curved design for you to reach the whole desk easily. The backside is also cut inside, so you can easily attach a monitor arm. At the front part, they have introduced two arm pads on each side for you to rest your arms on comfortably. I have not seen these on any other desk before.

The carbon fiber surface is great to look at and feel. The corners are made rounded, so you don’t randomly bump into them. You will also find a controller on the left side to control your RGB lights. The RGB lights are placed at the sides and back of the desk. Beware of this desk’s images on Amazon, which shows the outer parts of the legs lit up, but in reality, these are just decals.

Depointer also comes with two cable grommets and a power strip holder beneath the desk. On the back, you will also find a large gaming style fender that looks amazing. Assembling this desk is quite easy, and they have also introduced a quick disassemble button that requires a single press to take the tabletop off.

Van space has a similar design to Z2 and Z60, but it is available at a much lower price. Eureka is a popular brand, and their desks are quite expensive than other companies. So if you want a similar desk like Eureka ZS-1 but don’t have the budget, then Van space is an excellent option. There isn’t much difference in the quality because most of these desks are made of the same materials.

Talking about the features, it includes a headset hook, a cup holder, dual cable grommets, a large mouse pad, and of course, RGB lights. It also comes with a power strip holder at the back. The large plastic trims are on both sides of the desk with built-in RGB, enhancing the overall look.

The tabletop has a carbon fiber texture, which looks great. Van space has two stabilizer brackets connected with the legs and tabletop for maximum stability. Each leg has adjustable, stable feet to prevent wobbling on uneven floors.

You can also check out cheap gaming desks if you are on a budget.

CNASA is a premium gaming desk with a price of just over $200. It has a nice ergonomic design and solid construction and has the same z-shaped leg design and side plastic trims with built-in RGB lights.

The front part of this desk is ergonomically cut so you can have everything within your reach. The features of this include a cup holder, a headset hook, and two cable grommets. It also comes with a large mouse pad, but it would be better if it were bigger at this price point.

The overall construction of this desk is impressive. It has two steel bars for maximum stability. The tabletop is made of environment-friendly MDF and has a carbon fiber texture. Beneath the desktop, there is a collection box/strip holder.

From all the desks on this list, this one has the best looking side trims.

Okay, I know some of you might get tired of looking at the same z-shaped leg design. This one is a bit different and has a t-shaped leg design. The side trims are smaller on this one and have an RGB button on the right one. You can select from six colors and change between two modes.

The RGB lights on this gaming desk are placed on all sides/edges of the tabletop, which creates an immersive gaming environment. High-quality fire-retardant plastic material is used to cover these RGB lights to prevent any issue.

The overall look of this desk is quite impressive. The tabletop has a carbon fiber texture, which gives a nice modern look. The features include two cable grommets, a USB controll/DVD rack, a cup holder, two headphone, and a power strip holder.

There is also a 55 inches version with a similar design, except the LEDs are only on the trims.

This one is sold by the brand named Dreamact. It’s a new launch and has no reviews on Amazon as of 1/5/2021. I had to include this desk because there aren’t many gaming desks with LED lights available.

As I mentioned earlier, most of these desks are made with the same materials, so quality is not the major factor. This desk is available in two colors, red and black. The base structure is made of metal and has z-shaped legs like most desks on this list.

The tabletop is made of P2 MDF and has a carbon fiber texture. The surface is stain and scratch-resistance, which makes it easy to clean. The features of this desk include RGB lights, two cable grommets, a headphone hook, and a cup holder.

The RGB lights are placed inside the plastic trims found on both sides of the tabletop. These trims enhance the overall look of this gaming desk, and RGB lights create an immersive gaming experience.

The overall structure of this desk is sturdy, and it can hold up to 400lbs of weight. It has steel brackets connecting the tabletop with legs to increase the stability.

It is an excellent gaming desk with a large desktop and nice graphics. The only reason I put this desk, at last, is the design of the base structure, which looks quite old. That’s just my opinion, and some gamers might like this over the z-shaped design.

Another downside to this desk is the high price point, and I think it should have been priced at around $200. At one point, it was selling for $300. (Check the latest price as it was on sale at the time I wrote this review)

This desk’s pros include LEDs, a USB hub, two headphone hooks, a cup holder, and a phone/tablet slit. The middle slot has enough space to hold multiple devices, and you can also charge them using die-cut holes. It also comes with an under desk cable management or a storage basket. This desk has many good features.

There are forty-eight LED lights integrated into the tabletop, but they consist of a single blue color that you can’t change. The USB 3.0 hub is a nice addition. It allows gamers to charge their devices without getting up.

Unlike most of the desks with carbon fiber surface, this one has a plain surface, and you can easily slide your mouse. The desk itself is very stable and has two reinforced steel bars attached under for maximum sturdiness. 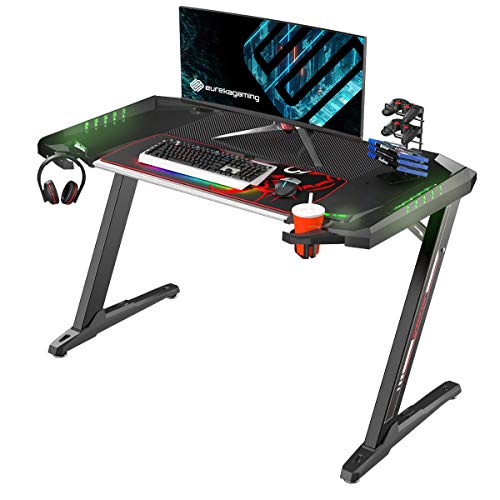 Do you have anything to say? any suggestion? Just shoot me a message and i’ll get back at you.